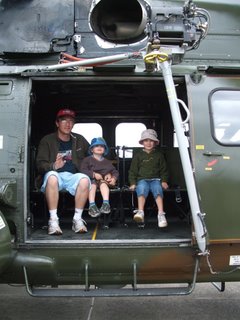 So I have been MIA. Sorry about that. I have been buggered from work and we have had some hectic weekends. This last almost 3 weeks has gone so fast it is unbelievable!

So we went to the airshow and had a great time! This is Steve, Kate and Luke sitting in a helicopter. My favourite displays were the dancing helicopters – 2 helicopters in sync ‘dancing’ so close I thought they were going to crash! The F111’s were awesome with their dump and burns. My other fav was the FA18’s and their speed and agility. Awesome stuff. 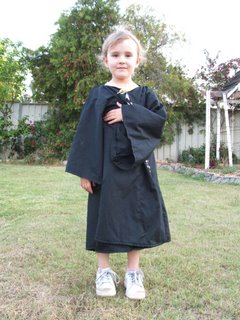 So we went Trick or Treating on tuesday with the kids and SIL. Wow! The kids had the best time and did not want to go home!!! Cant blame them though, you dont get lollies everyday for dressing up and knocking on doors! It was so funny with some of the things they ended up with, like a packet of burger rings! I think because they looked cute, yes I am biased, that people wanted to give them something. We just did our small little block, but boy, did they score big time! LOL! So many treats! They are allowed 2 a day! We had a few people who came to our door but not many, so next year, I am going all out! 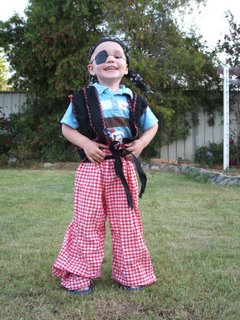 I am going to stick a pumpkin on our letterbox so people know to come to us! Seriously, if you didn’t do it this year, do it next year! Your kids will enjoy it! Kate went as Hermione out of Harry Potter and Luke when as a yarrrr pirate!
I am such a mean mum! I took Luke’s dummies off them the other night while he was asleep and cut the rubber off them! He has become so attached to them it wasn’t funny! He would have one in his mouth and one in each hand. So they ‘broke’. He was cranky to begin with but he is getting better now. It has only been 3 days so hopefully in a few more he wont even remember what a dummy was! The thing is, in just 3 short days, his speech has improved so much! I can actually understand him!
Besides that, not much else has been happening. Just work and house stuff. Boring. It must have been a full moon this week as all the loonies have been out in force at work! I am so over the place it isnt funny. I applied for a new job so we shall see how that goes. Not getting my hopes up, I just thought I would apply on a whim.
Anyway, thanks for stopping by and take care!!! 🙂