Skip to content
Sunday Share
I just want to get this story down so I don’t forget it.
Last year when we went on holidays, I snapped this photo of Amy flying a kite at Dolphin’s Point. She was looking through my box of photos and came across it. She was excited as she knew the person in the photo was her. But then all of a sudden, she started saying that the people in the background were her family and asking where they were. She started sobbing as though her heart had broken because she wanted to know about her ‘other family’, as she kept calling the people in the photo. She is still adamant a week later that she has another family. At least she isn’t upset about it anymore though, just more matter of fact. And if we don’t ask her about it, it seems she is starting to forget about having another family out there somewhere.
I think this all happened because when Kate went on her school camp, Amy said that Kate wasn’t coming home as she was lost. Poor little mite is too young to fully understand. 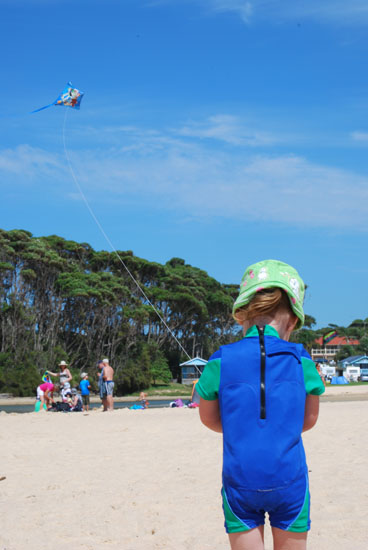 I did have a layout to share as well, but lo and behold, it got picked up for publication. I don’t get that many acceptances so I still do a happy dance when one gets the green light! Yippee! 😀