Skip to content
I should start this post by saying I sometimes do stupid things. And by sometimes, I mean more often than the average person. It’s a gift I have.
I had a fantastic idea last weekend to get up early and go for a trail run. I had spent quite some time researching which trail I would go on. I eventually decided to run from Springwood to Blaxland. 13.5kms, it shouldn’t take me any longer than 2 hours, I’ll be home in time to go to the Knitters Guild meeting and have a wonderful day.
So, I parked the car at Blaxland. The train was late. I mean, who timetables these things?! Oh yeah, me, right. I get to Springwood, read over my instructions and start off. The first 5kms of the trail was beautiful, except I have been watching far to many murder mystery shows for my own good and every time I heard a twig snap, I crapped myself. So, I did the first half at a relatively good pace. LOL.
I got to one section of the run where I had to cross a creek bed and the instructions just didn’t make sense at this point. I found a cairn which meant I knew I was on the right track. Well, this ‘right’ track diverges at one point and I took the wrong one. Lucky for me, I ran into some people looking for a biblical carving in some stones and they pointed me in the right direction. Up a damn hill. But it’s ok as I am rewarded with this. 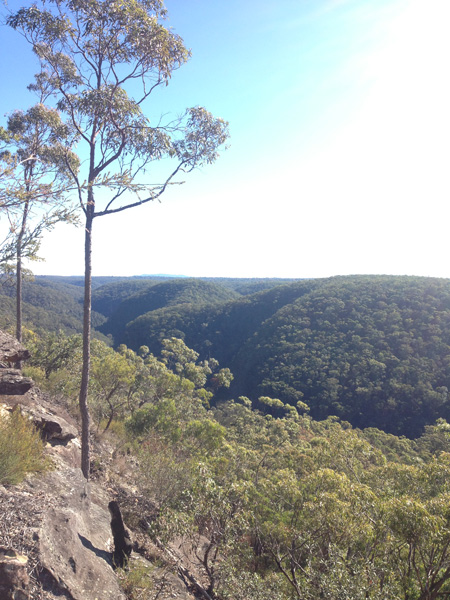 So I get to the top of the hill, read the next lot of instructions, ring Steve as surprisingly I have good mobile coverage and let him know it’s taking a little bit longer than expected but I should be finished in an hour or so.
Or so.
So I turn around and take off down the path. However, this side of the gully has had some backburning done. It’s ugly, like a moonscape and the branches that overhang the trail are sharp and they scratch my legs a bit. I find the stump I’m meant to go past and I keep looking out for my intersection.
I find one. I read the instructions, yep, there’s a cairn there. There’s a track. Yep. This is the right track. 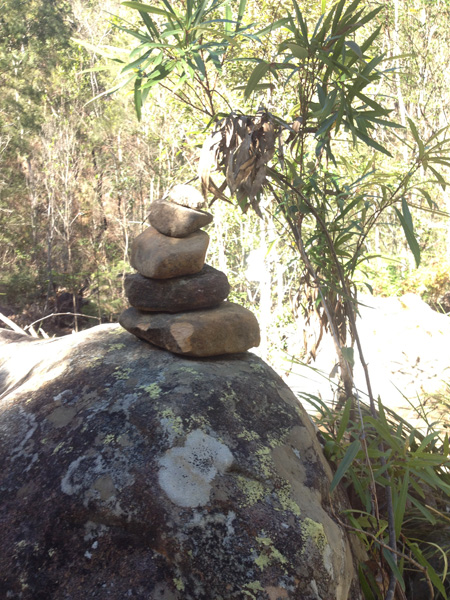 So off I go. It’s further than the instructions said, but I’m sure that it’s all ok. I come to the rocky outcrop and the instructions tell me to go left then right. Yep and yep. I follow this down to the river. Yep. All the instructions are working out, mostly anyway.
Until I get to the other side of the river and then the instructions don’t make any sense.
This is where I realise I am lost.
Insert expletive.
And I finished my water about 3kms ago because I thought I was almost finished.
So I find a trail. It’s well defined so I figure it has to lead somewhere, right? Yes. To the railway tracks. I have a good mobile signal so I check out my map app and I see that I am not where I need to be, but at least I know where I am. I continue running. I see a man on the path and he tells me I am very close to the end of the trail.
I find the station, the wrong station, but I don’t care. I am so dehydrated at this point as I have been going for almost 24kms or 4 1/2 hours (the final 8kms with no water.)
I almost hug the drink machine when I get a drink out of it.
All is right again.
Looking back, I actually really enjoyed the run. Just next time, I will go on a more used track. One which is much more well defined so I can’t get lost. 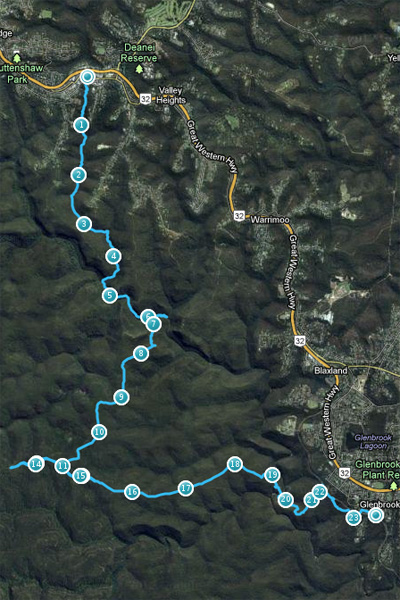 And not rely solely on instructions that could possibly be out of date.
And see that 9km mark? That was where I was meant to turn off, so I ended up two ridges over.