Skip to content
So the other night I was a little lost for words. I’ll remedy that now.
Firstly, I would like to congratulate my 9 fellow Scrapbooking Memories Master’s. It is a huge honour to be a part of this amazing line up.
Louise Nelson
Anthea Peterson
Leanne Allinson
Kim Jeffress
Kaitlynne Roil
Jo Kinder
Renee Iveson
Tam Milborn
Sophie Sim
When the phone call came I was at work. I didn’t catch the name, just the “from Scrapbooking Memories” part. My heart dropped in to my tummy. I thought the calls had already been made. Apparently I was wrong. I honestly don’t remember much except I said “Oh my God” an awful lot and “Are you serious?” also quite a lot. And most times both of those were said together. I was shocked.I mean, this was my seventh time in which I have entered Master’s and to be truthful, I thought I was destined to never win.
I couldn’t believe the prizes once they started rolling in. Steve would get them from the post office for me on his way home from work. The lady once commented that  it was a fair amount of craft stuff I was getting. EEK! I didn’t want the cat let out of the bag just because the boxes had brand names on them!!! But all was good. I somehow managed to keep my mouth shut for 10 weeks. I think it helps that I don’t see many other scrappers on a regular basis, except a couple of close friends who I knew wouldn’t spill the beans on me. 😉
Then the challenges started. I have actually found that I am enjoying them far more than I thought I would. The supplies are ones which I wouldn’t normally go for, so straying outside of my comfort zone is actually quite a nice change. I’ve always thought I was too ‘safe’ and boring.
Want to see the prizes? This is my kitchen table. Somewhere there, anyway. 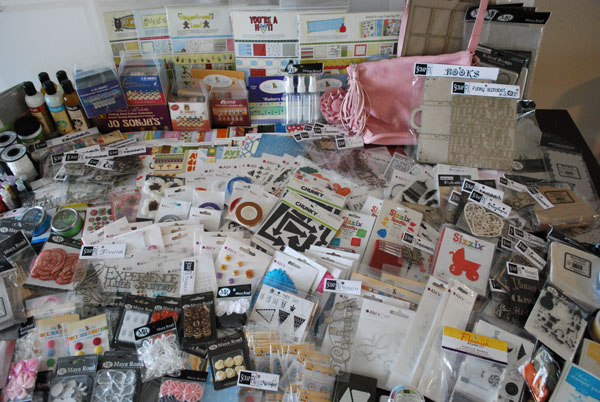 But before my stash doubled in size, Steve decided he would build me a craft cabin. It’s finished (well, mostly, just don’t look too hard). I even started to move in tonight. I can see many hours crafting with the kids. Ask Steve and he will say he sees an uncluttered garage, free from my crap! So, a huge big thank you to my husband. The best hubby a crafting girl could ask for. Although he only wants the extra room for his go kart. Hmmm. Watch this space for a piccy!
Lastly, thank you so much to everyone for their congratulations. I appreciate it more than you realise. 🙂